this is a girl who i began to refer to as ‘stoic vicky’ – and everyone knew who i meant. 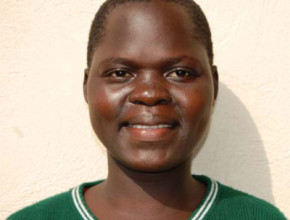 our first day on the land at the village of hope in uganda, the children shook our hands and greeted us and bowed (so sweet!) and vicky was among them. there was a variety of responses to us – some of the kids were eager and outgoing, some of them a little shy but interested,… vicky watched us. quietly.

when we went to evening prayer down in the school room or when we sang worship to the Lord at 6:30 in the morning in one of the kids’ houses, vicky was watching us. quietly.

in fact there were several times when the kids would be in our camp and we’d be singing or taking photos or playing games and vicky was nowhere to be found. she didn’t jump into anything, she wasn’t going to be drawn in by the new, shiny toy (us) like some of the others. she stayed on the side or out of sight. but i saw her watching.

one afternoon there was a group of us sitting in the grass while the others were doing sports. 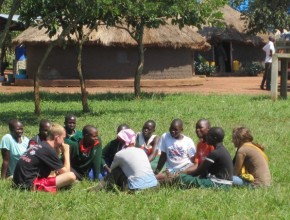 “tell us a story,” joyce asks.

their culture is so big on telling stories. americans? not so much. and i had no idea what to say. i hemmed and hawed and considered something like the three little bears, but finally decided to tell them the story of how jon and i met in high school and then he went his way and i went mine and we had lost track of each other. and then we met back up again and we knew we were meant to be together.

they smiled and laughed and then asked for another.

another? but i don’t know any stories! it was a stretch to get that one out of me.

and then for some reason i thought of my dad and shared with these girls that my dad had been a preacher. and when i became a believer and follower of Christ that my dad was the one who baptized me. and that he lives in heaven now, but that one day, i am assured, i will see him again and spend eternity with him.

it made me cry. just a little.

and vicky was right in front of me watching the whole thing. quietly, of course. in fact, thinking back, i believe she might have been the one who asked for that second story.

later on that day was when i went to the well with the girls. we sang all the way there, them wanting to learn all of the songs our team had been teaching them. they loved the jungle song and would ask for it by saying “ooh ooh”.

when we got to the well, and the smaller children were filling the jerry cans with water, we moved under the shade of a tree where vicky made a place for me to sit. they all stood around me, even some behind me, just to hear my songs.

those few glorious moments at the well are forever etched on my heart, for it was there that i began to see this soft, sweetness in vicky. she was a leader, i could see that. she would begin songs and lead the other girls in them. but she would also gently ask me to sing another. and another. and yet another! and for stories. and for recitations of acholi words she was teaching me.

how interesting that this young lady, so near a well full of water, would thirst for something else. reminds me of another woman at a well.

oh i hope i was able to give her that, for all i had with me to give her was me. i poured ‘me’ over her. gave her my attention and my time and my smiles and songs.

she taught me one of their songs, ‘child of God’, and we sang it over and over again. i can even hear her voice, kind of whispery and it would all but disappear if she sang too high.

then i taught them a song that we sang all the way back to camp. some of the other kids heard us singing and they wanted to learn it. then others on my team decided we needed to teach it to all of them! it became a favorite. 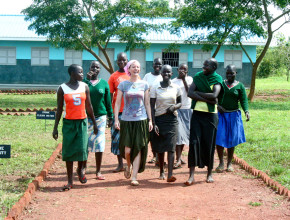 after that time at the well, it seemed i was never without at least one of those girls. but something special happened between vicky and me. when we were doing our ESL classes or bible stories, i would see her make room for me next to her on whatever bench she was sitting. her eyes would find me and i had a feeling she was always aware of where i was.

days later when it was time for them to load up in the vans and head out for the 3-week holiday from school, she was packed somewhere into the middle of the van. i was reaching in, holding hands with everyone and loving on them and saying goodbye. i had reached in, holding myself steady with one hand on the outside of a window. when i looked, she had placed her hand on mine from the inside. separated by glass but joined together by so much more. so much unsaid but entirely understood by the both of us.

i looked over at her and saw tears in her eyes.

this reserved, quiet, stoic young woman had tears in her eyes. they had learned not to cry. it was a lesson beaten into them. a lesson they learned by seeing first hand that when you cry you are killed. the LRA would not tolerate tears and would kill you themselves or force one of your peers or siblings to do it if they caught you crying. the ones who could turn that part of themselves off, would be the ones to survive.

vicky had stopped crying because it kept her alive. and now she had tears in her eyes.

my initial reaction was to think to myself, ‘oh, my dear vicky. don’t cry. please don’t cry.’

but that didn’t last long. because what those tears really meant is something sweet and beautiful. for they not only meant sadness to leave the village, and perhaps sadness to leave new friends, but also openness, healing, passion, feeling, a part of her coming back to life after so much horror and fright. those tears meant a new beginning, a new kind of life where she can have thoughts and feelings of her own and have that be ok. she can embrace every part of herself that is made in the image of a God who feels things, too.

those tears on the outside showed me that on the inside she is a young lady coming back to life. it reminds me of lyrics from a david crowder band song “what was said to the rose to make it unfold was said to me here in my chest.” God is restoring her soul and the bigness and brightness of His love is opening her up like a flower in the sun.

oh how i pray that she continues to blossom and grow into the woman God has designed her to be. and i also pray that i get to watch that happen before my very eyes. 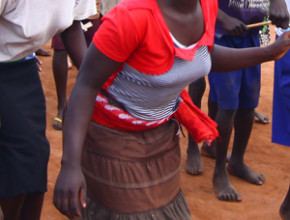