staying at the hotel florida in gulu. 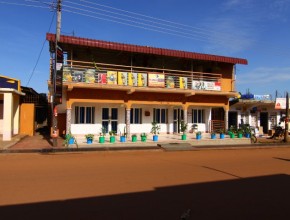 breakfast was a spanish omlette (if you ordered your eggs scrambled you didn’t get served… right renee?), toast w/butter and jam, fresh banana, coffee and passion fruit juice.

the shower was a warm drizzle. but it was warm! it wasn’t a separate little room like we are used to. it was simply a pipe along the wall of the small bathroom, then piped halfway across the ceiling and there was the shower head. the bathroom was the shower. 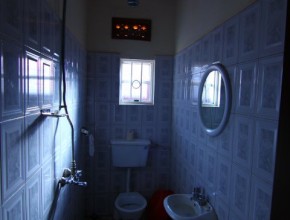 we had devotion as a team then loaded into the van. this time we had rose, asunta, jeff and charles, our skilled and fearless driver who literally crafted us into the first camp. we learned later that this camp was the only one where the village of hope beads are made.

as soon as the van door opened, connor and careenna were off playing with kids. they were just… gone.

on a tarp under a tree sat some older children beading necklaces. these were the village of hope kids. the camps contain all kinds of people, but only specific ones are cared for under the village of hope organization. rose is the one who finds the children, orphaned and usually a former abductee of the LRA. in some camps you could tell the difference between them and the others, by their countenance, their cleanliness.

feeling shy and unsure, i took off my flip flops and sit on the tarp next to a gal of about 14. her name is janet. quietly, she hands me a strand of the necklace she is making and shows me how to bead. before we left that day, we had made three necklaces together.

someone remarked how well the kids worked together and rose said it was because we were there. hmm… some things are global, i guess.

we asked their names and ages, but while answers were given, many ages are really unknown as are birthdates.

after a while, the kids gathered and sang to us. normally there are drums to accompany them but the kids with the drums were at a celebration so were unable to join us and provide a beat. 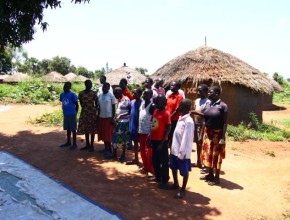 after their wonderful performance, we got up and sang two of our songs and introduced ourselves. rose had them repeat our names. she is so very good with the children.

mindee had found a friend that day – a baby girl with no diaper. she remained cradled in mindee’s arms nearly the whole time we were there and cried when we left. 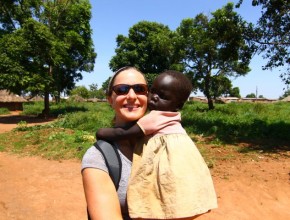 as soon as we boarded the van rose passed out a snack for all of us – a bag of potato crisps. as we pulled away, kids followed us out, smiling, waving, holding out their hand for our snack. asunta got onto them for asking for our food.

as we pulled away i felt like… i didn’t do anything. i mean i listened and laughed and sat next to janet and made a point of saying goodbye to her. i gave them my time, but it didn’t feel like enough.

headed to lunch at diana gardens. buffet style: rice, beans, mashed banana, posho, something that seemed like spinach but wasn’t, potatoes. i had my second of what would turn out to be many stoneys. a ginger beer that i fell in love with.

before eating, i washed my hands. there was a huge bucket with a spigot at the bottom and some soap sitting on the top of it. that would be the kind of ‘sinks’ we would use for the whole of the trip. other than the baby wipes and purell, of course.

after lunch we went to the place they do the tie dye. the fabrics were beautiful! we take off our shoes and enter. the tiny room had tarp over the floor. it was hot. the smell of the dye and of the sweat and heat mixed to a delicious, heady aroma.

the women worked with practically no words. they knew what to do, they knew how to work with and around one another, it could be done with only the slightest amount of communication. silent camaraderie. with babies tied to their backs they tie, band or wrap fabric. then they bring in the water they’ve boiled outside, pour it into shallow bowls that contain dye and some powder.

as we were leaving i saw a pile of seeds on the other end of the porch. it was sim sim (sesame) and they were left there to dry in the sun.

onto the next camp. we were greeted by the village of hope kids singing to us before we got out of the van. then they moved into the middle of the huts and sang and danced around drummers. asunta asked if we wanted to dance with them. why not? so we joined. 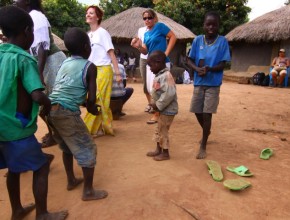 my neck didn’t move like theirs did. asunta was behind me and kept saying, move your neck like this. i didn’t know what like this was, but it apparently never made it over to me.

a few songs were performed in rows and we sat and watched. the team leader helped the kids. they did a whole presentation of songs, memory verses and a drama “God is with me.” 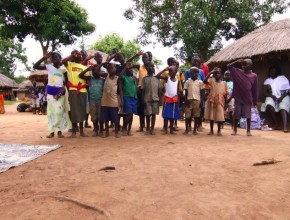 then they sat while we performed our two songs, introduced ourselves and presented a bible story. then they danced more while we sat and watched them. a child sat in my lap. aww. 🙂

as we left, they shook our hands and bowed slightly. they kept waving and waving.

back at hotel florida, halft of us went with asunta to play volleyball (she is on a team and plays nightly). the rest of us (debbi, renee, chris, mindee and me) walked around gulu. we stopped in at the internet cafe but since the connection was very slow we opted to come back later.

sat outside the hotel for a while taking in the city, the smells, the sights, and journaled. it rained.

i mentioned to chris how i’d felt about not doing anything. she said that just us being there with a kid on my lap or singing to them was a blessing to them. i scratched my head. did not compute.