i’m spending a rare moment alone at home. jon is playing with da boys over at a friend’s house.. doin’ techie stuff. i only have one thing on my agenda tonight and that’s to write 5 or 6 lines of my testimony for a drama thing we’re doing in december. until then i’m watching five peppers in trouble.

jon went over to moms last night to get some of our stuff from her garage to put back in ours. while he was there he also picked up a few things she had set aside for me. one of which was my birfday card!!

my birfday kind of got put off this year. at least temporarily. with all of us having gotten sick it just didn’t seem right. we’re going out for my dinner this sunday, though.

mom also gave me some orange bulbs for our christmas tree. when we get it set up it’ll look smashing!! 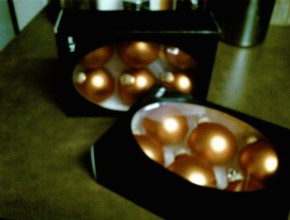 i can’t believe people are already decorating for christmas. it used to be they’d do it before thanksgiving. now it’s happening before halloween. now, that’s just wrong! nobody messes with my holiday and gets away with it. grr!