why’s it so hard to tell the truth?

i watched a documentary that gave an inside view of a tony robbins week long seminar. this thing costed about $5000 or some outrageous amount like that to attend. for each attendee. dang that guy is raking it in!

tony would focus on certain individuals during the course of this week, helping them dig deep and find a solution or peace about something. usually through gentleness or hand holding. but one lady got pummeled by tony. he used tough love to lead her to a life decision that she didn’t want to make (break up with her boyfriend) and ‘forced’ her to do it in front of everyone right there on her spot (over the phone). his tone with her was anything but gentle.

when interviewed later in the week she was singing tony’s praises. she felt relieved and was glad she came to the seminar!

and it made me wonder – what made her so pleased with her decision to come? she spent alotta money. she was publicly humiliated. and she ended a relationship (some time after the seminar, they got back together).

what made it worth it for her?

and i realized that tony did something that was so unusual to her, so foreign, that it was worth all of that: he told the truth.

truth saying is such a rareity that we will pay for it, take a beating for it, thinking it’s some kind of rare gem we can only get from a guru. only those wise sages that live on mountaintops can do truth saying. so we climb up the mountain just to hear them tell us something painful. 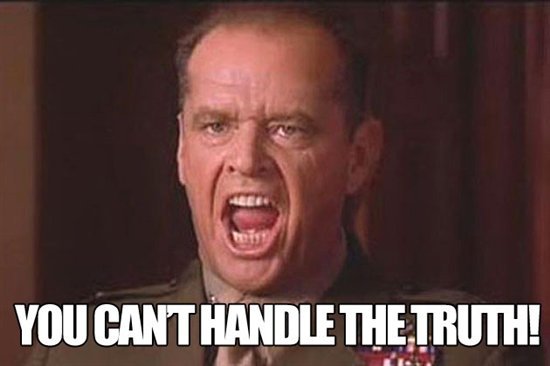 we live in a society that cannot handle the truth. we’re so afraid of saying it for fear of hurting someone’s feelings, looking like we’re heartless or just being a jerk, or losing a friend or status over it.

i know people who are so afraid of telling others what they think, that they would rather walk away from a friendship than confront their friend about something so small that it wasn’t worth ending a friendship over in the first place. but apparently the prospect of confrontation was.

this is our world. we’re frightened to tell the truth. and so hardly anyone will do it. and when you finally come across someone who does, they must be a guru. they have a rare gift for understanding people and know how to impart their wisdom on the rest of us lowlies.

no! they’re just bold enough to tell the truth! they’ve no greater insight than anyone else … they just have the cajones to say it. out loud. to people’s faces.

ok, ok, there are some people who do have greater insight. but the majority of the time we are looking at normal IQ-type-of-human-folk and putting them on genius level because they aren’t afraid to open their mouths.

and here’s the real kicker – a lot of the time it isn’t the Christians who are the truth sayers. so when we look to the gurus, are we really getting the most sound advice? is our eternal future being considered? or are we just getting truth that helps us live a successful life by the world’s standards?

Jesus was never afraid to go against popular notions or powerful people in order to get truth out there. he knew that the people who were ready to hear the truth would hear it, and their lives would be forever changed by it. he risked everything and withheld nothing to deliver truth.

one of the hardest things we can hear about ourselves is that we deserve death. it’s an ugly painful truth. but we have to hear it in order to understand our need for deliverance. and once we grasp our need for deliverance, then we can hold out our hands for it. otherwise, we won’t know we need to open our hands for anything at all! so hearing this awful truth actually saves our lives! what an amazing gift to offer someone – truth!

and on a smaller scale, offering gentle course corrections for those around us is also a gift. it is a kindness we can bestow on those we love. helping them to lead better lives, weed out the parts that don’t add value, spur them to reach greater heights as a person and as a follower of Christ.

what if God purposely placed you in the life of someone who needs to hear some truth … from you. what if it’s his plan for you to be a part of their heavenward journey? but then, you are too afraid of hurting their feelings or of whatever the confrontation may result in, so you stay silent. you’ve just robbed that person of an opportunity to grow. and you robbed yourself of being a part of God’s incredible kingdom work. lose-lose.

i wonder what our world would look like if we became truth sayers instead of truth avoiders.

we wouldn’t need to sink money into guru seminars or climb mountains to sit at the feet of the sage. we could learn from each other and grow together. and just be honest for a change.

oh. and we need to be better truth hearers, too